Have you heard about my new creative community? Learn More

I earned my bachelor’s degree during the Great Recession. Not exactly the best time to launch into the “real world.”

But I wasn’t worried because I had a plan. My plan included moving 800 miles away from home to attend graduate school in the dusty desert of West Texas.

I had only visited once before during an official recruiting trip, reminiscent — I’m sure — of how star athletes are recruited.

During the weekend, I met professors and potential classmates, toured the Spanish Renaissance-style campus, and got a taste for the city (the flavor: tex mex).

The English building, where I’d take classes and share office space, looked like a palace. The real cherry on top, though, was the university’s brand new LEISURE POOL, complete with a LAZY RIVER. Some things really are bigger and better in Texas.

Campus was charming, and I was wooed by the western glamor of it all.

My program was well-regarded. My professors sung its praises. I could write my ticket anywhere with that degree from that university, they said.

All this logic and the magic of my trip sealed the deal. I could already picture myself lounging by the leisure pool. I was gonna be a Red Raider, and I had the T-shirt to prove it. 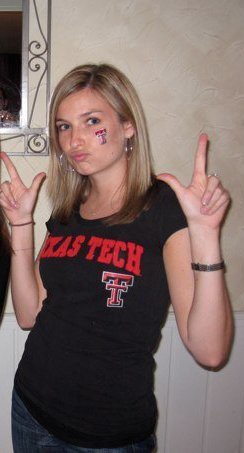 A few months later, now the proud owner of a freshly printed bachelor’s degree, I packed my life into a yellow Penske truck and hit the trail toward Texas Tech. (Well, my dad drove the truck while my mom and I enjoyed the comfort of my Honda Civic.)

But believe me, whatever awesomeness was there quickly wore off.

My plan was failing. A storm was brewing.

Have you ever been there? Sinking into a stormy situation that looked like a good idea … at least on the surface. Coming to terms with plans gone wrong. Reconsidering a decision made in vain.

The problem with my plan: I never consulted God. Instead, I was clinging to what I wanted my life to look like. Chasing dreams that weren’t right for me. Running away.

When we’re running, ignoring God, that’s where we get into trouble.

Remember what happened to Jonah?

God told Jonah to go to the city of Nineveh. Instead, he ran in the opposite direction, boarding a ship headed west to Tarshish. Turns out, he was headed toward rough waters.

But the Lord hurled a powerful wind over the sea, causing a violent storm that threatened to break the ship apart. (Jonah 1:4 NLT)

Jonah was below deck in a deep sleep. When the crew roused him awake and realized his disobedience caused the storm, he asked to be thrown overboard.

As soon as Jonah plunged into the raging sea, the storm stopped.

And then God provided in the form of a fish. Swallowed up and deep inside, Jonah cries out to the Lord.

Have you ever felt swallowed up by your situation — sunken so low you had nowhere to turn?

When we’re as good as dead, God’s way suddenly doesn’t seem so bad.

Whether we’re traveling to Texas or Tarshish, sailing away toward the wrong destination, chasing after our own desires, God will course correct by whatever means necessary.

A giant fish. An unexpected layoff. A bad breakup. Heartbreak.

In my distress I called to the Lord,
and he answered me.
From deep in the realm of the dead I called for help,
and you listened to my cry. (Jonah 2:2 NIV)

In his mercy, he will deliver us when we cry out. He is the God of second chances. Miracles. Life-saving tactics.

I knew I needed to leave Texas. So a mere four months after settling in, I was packing up.

God bless him, my dad drove yet another moving truck from Lubbock back to Omaha, giving me a hard time and quoting a Mac Davis song about how I thought “happiness was Lubbock Texas in my rear-view mirror.”

(It was true, although I was sure going to miss Shiner Bock on tap.)

Just as Jonah had another chance to follow God’s command — I did, too.

I left Texas feeling defeated and depressed. Angry, even. A graduate school dropout, a college grad with a degree but no job, a loser moving back in with her parents.

Also like Jonah, I was more worried about my own reputation than God’s glory.

But God is faithful. In the midst of my suffering and disobedience, I turned back to him and confessed that I was chasing after my own desires at the expense of my soul (Matthew 16:26).

He forgave, restored, and rerouted me to a new path. Part of his plan.

And now I can share this story with you — a testimony that God’s purposes will prevail even when we make mistakes and veer off course. He will work through ordinary, imperfect people like Jonah — and you and me.

So it’s not too late. You’re not too far gone. If you’re headed west, you can make a sharp turn toward the True North.

You can surrender all your plans for his perfect plan — your destiny.

Invite God to steer, and ask him to show you …

What do you need to see in your rear-view mirror?

Photo by Jakob Owens on Unsplash

Writer, teacher, creator, and founder of Worthy Words Collective — activating anointed writers to use their voice as a force for good

My job (and my joy) is to write words that reveal truth and release hope.

Join my email list so we can stay in touch. Just for joining I’ll send you a six-day Bible study created to spark your spiritual growth.

40 weeks of truth from scripture and teaching from yours truly, emailed every Friday.

Reflecting on my first season teaching dance … I

For those who want to be a voice: First get to kno

Happy birthday (and belated anniversary) to my won

The story of your life is masterful. Every moment

“my body, my choice” What we choose to do wit

Lately the Lord has been highlighting to me his he

Your life is telling a story. Do you desire to bet